I bought a big corkboard last winter to hang in my office. The first thing I used it for was to help organize details in a series I’m working on, but I’ve since pinned all sorts of writerly crap on it.  The only problem was that it didn’t look all that great, with the unfinished wood frame and lack of any sign of decoration, so I decided to bling it up a little yesterday.

It measures just under two by three feet. That’s plenty of room, but I wanted a section on one edge for index cards that represent WIPs, project ideas, and things I need to do.  After I painted the frame, I used red rickrack to create a separate space for those index cards. Then I added some red ribbon crossing in the open space. Push pins hold all that in place instead of glue, so I can change things around as I need to for story boarding or whatever.  Below is a close-up, to show the detail and pretty sparkles in the black paint. 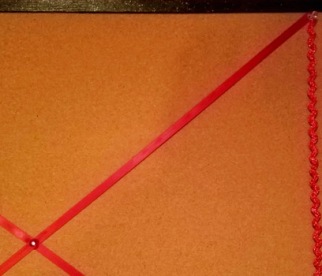 It only took an hour, but I think it looks a hell of a lot better. Here’s a before and after shot, with the same index cards. Makes a difference, huh?